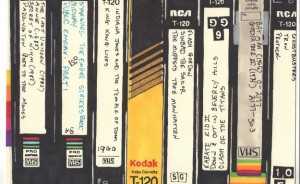 By 1974 Sony had released its Betamax; The first video recorder and player for the home market. Capable of recording up to 1 hour of TV footage.

At the same time JVC where working on a VCR of their own. And in 1976 JVC’s Video Home System (VHS) was born. With up to 2 hours of recording time and costing less than Sony’s Betamax, It was proving popular for the home audience.

With Betamax and VHS in direct competition, the 1970’s VHS vs Betamax would become known as the ‘format wars’. With VHS eventually winning the war.

By the late 1980’s VHS was a popular edition to most households. With the ability to record and rent films, VHS remained popular for over 30 years until it was eventually replaced with newer formats.