I recently heard that The Lion King was, and will forever remain, the best-selling video tape of all time. Hearing this brought back happy memories of myself and my younger sister sitting down together to watch our own copy of The Lion King, back in our youth.

So this got me thinking about other people’s memories of VHS. What was your favourite tape? The one you played over and over until the tape crinkled or snapped. Or the first tape you bought?

One of my favourite memories as a young child was walking up to the local Video rental store with my mom to pick out a video and the excitement of running home to watch it.

We’d love to hear your favourite VHS memories. If you love VHS like we do, drop us a message below.

A few weeks back, Jimmy Kimmel of Jimmy Kimmel Live sent out a tweet asking local businesses in Austin, Texas to contact him for the chance to get help with making a TV commercial for their business.

Out of the thousands of responses, he picked Vulcan Video, an old school independent video rental store. The store specialises in foreign, cult and classic films but amongst the copies of DVDs, lies the VHS section. Yep, you heard me, apparently VHS still sells in Texas! And Vulcan Video never gets rid of an old VHS.

Kimmel ropes in McConaughey to help out and, as they say, the rest is history.

So, if you’re in Austin, Texas and looking to rent a video, remember…  “Don’t be a loser, be a Vulcan Video Chooser.”

For more on this story:

Flatpack no.9 is a unique film event showing a mixture of films, performances, music and offbeat shorts for kids as well as live cinema and plenty of extra surprises.

The festivals in its 10th year and still growing. Originally starting out as a filmnight at the Rainbow pub in Digbeth and growing from there, it’s now gained a cult following.

Taking place in venues across Birmingham between 19-29 March 2015.

Check out whats on, event details and more at flatpackfestival.org.uk or browse the full programme here.

Back in the 1970s, 80s and early 90s most home’s owned a VCR player and most high streets had a Video rental store.

Even if you didn’t own a VCR, you knew what one was.

By the late 1990s, with the creation of the DVD player, VHS was a dying medium.

Jump to 2015 and the VHS is all but a memory to the grown ups and to the majority of children, unheard of.

CNET put it to the test. Check out kids reactions to a VHS player in this hilarious video from www.cnet.com:

Read the full article at www.cnet.com 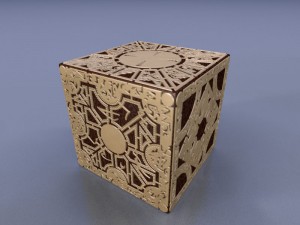 Back in 2011 at a bus stop on the Old Kent Road, London, a VHS copy of the 1987 film ‘Hellraiser’ mysteriously appeared on top of the shelter.

Nobody knows who put it there or why, but there it sat for 2 years, gaining the odd nod on twitter from top deck commuters.

Ok, so you’re probably thinking ‘So What?’ but here’s when it get’s funny…..

Jump to 2013 and a brand new copy suddenly appears next to the first one?! And then it just gets really weird…….

A guy called Tom Wateracre who lives close to the bus stop picked up on the story back in 2014 and started chronicling the strange happenings via Storify.com and a Twitter trend ensued.

It even made ‘Time Out Magazine’. Read the full story plus Tweet thread here.

And just to prove it, here’s a picture of the infamous tape on Google Maps street view!

Check out the links below for more amusing articles on this story: